Ahead of our forthcoming podcast interview series ‘Lessons in Leadership’, I thought it would be appropriate to put down some thoughts and memories that have been sources of inspiration for me over the years. 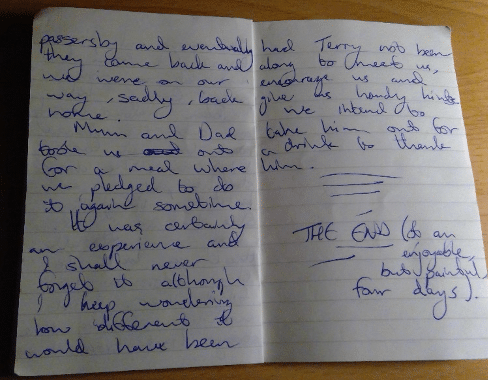 Working with Revolution Learning & Development over the last 10 years, as I’ve continued to contribute to the training and development of business leaders and managers, I’m regularly reminded of the importance of role models and ideas that feed the stream of thoughts we might call our leadership mentality.

I wonder who comes to mind for you when you read the words, ‘inspirational leader’?

What are the mantras, quotes and concepts that have informed your approach to dealing with and leading others?

What advice would you pass on to the next generation of leaders?

These questions and more are at the heart of the interviews we are conducting with business leaders from a range of industries and backgrounds. We can’t wait to share these podcast interviews with you. If you’d like to get involved or know someone who would, please drop us a line here.

One of my early experiences of leadership that stands out from my college days centred around mine and my friend Martyn’s attempt to complete the Cleveland Way in the summer of 1994. We were both already keen on the outdoors but had thus far only entertained reasonably light excursions into the wild and a long-distance hike was something which neither of us had any experience of at all.

In my youthful ignorance, I simply figured that, if I can walk all day without a problem; doing that for several days in a row would present no real issues. Martyn and I were all excitement and gusto following the commitment to take on the challenge together; detailed planning had yet to settle into proceedings. It duly did of course.

Once the two of us began to paw over the maps and try to get a handle on provisions, likely camping sites, navigational challenges, distances needed each day etc it became clear we were both lacking in knowledge about large parts of the terrain as well as the extra requirements for a week-long challenge.

It was shortly after these first exciting but frustrating planning sessions that we decided to seek out some help. The majority of my outdoor experience had come through school at that point. We’d both previously been involved in several school camping trips that were slightly more high-octane than the typical tent-in-field-before-long-day-walks-and-peeling-potatoes-ready-for-the-next-day type, involving as they did a heady mixture of rock-climbing, abseiling, kayaking and orienteering.

One of our teachers, Mr Parkes, seemed to be the main outdoorsman on the staff as he had attended all of these trips. Mr Parkes was an Art teacher who we also knew was a long-time member of the local amateur dramatics’ society. His school persona however belied his love of the arts as what we experienced of ‘Parkesy’ most of the time at school was a short-tempered, gruff, impatient and down-right scary tyrant of a teacher – at least by comparison to the majority of the more good-natured ones and no doubt exaggerated in our young impressionable minds.

On the outdoors trips, however, we had seen another side to Mr Parkes. When the pressures of strict timetables and educational progress were relaxed, a playful, cheeky and caring personality had shone through. And it was this aspect of the man that prompted the thought to approach him for help in our plans to conquer Cleveland. We knew Mr Parkes had extensive outdoor experience and knowledge and hoped we might catch him in good spirits whereby he might offer us some useful information and help us piece together our plans.

A wry smile crossed Mr Parkes’ face when we told him of our plan. He seemed pleased that a couple of his students had continued to pursue a love of the outdoors having now gone to college where other distractions would undoubtedly attract our time and attention. But I remember he also scoffed a little when he asked about our plan for support and we told him we intended to complete the challenge supporting each other.

Neither of us had considered the need to have a support crew along for the trip. But, no sooner had our omission been embarrassingly acknowledged, Mr Parkes stood up and resolved to offer his personal support and had already begun asking us when exactly we intended to go so he could rearrange his diary.

Martyn and I were taken aback. Suddenly we were going to have an old teacher of ours coming along on our adventure and we hadn’t even invited him. We were simply asking for advice and now we had company. Nonetheless, I quickly became very glad of this fact. Mr Parkes immediately began talking through the route. He had completed it himself many years before and knew the inland and trickier areas very well; the long coastal part of the trip it seemed only required one navigational trick involving the sea and your left arm.

For the next couple of weeks, preparations were finalised and then, on the morning of 8th August 1994, there we were, Mr Parkes, his Staffordshire bull terrier Bob, Martyn and me, sitting in Mr Parkes’ mobile home, ready to set off for Helmsley in North Yorkshire and the start of the Cleveland Way.

Mr Parkes, being then well into his 60’s, was not joining us for the walk itself. His support would come in the form of waypoints. He would take a leisurely drive around the North Yorkshire Moors and then meet us at pre-determined spots along the path.

And so to lessons in leadership.

Throughout the expedition (as we soon began to call it) Mr Parkes’ long teaching career was in evidence at every stop. This I think is one of the primary if not the most important roles of a leader – to teach, to help others learn, to develop talent and realise potential.

Much of this, of course, comes through the indirect teaching that is role modelling but when someone takes particular time and pays particular attention to enhancing your knowledge, skills and character it changes a leader from someone to be admired into someone to be followed.

In his inimitable style, always crabby but curiously alert and highly passionate, Mr Parkes had – even before we had left the car-park on the first day – already taught us how to repack our bags – a valuable lesson we learned early and, in as far as timing also marks out great leadership, something that both got us, and kept us, paying attention to his words from the get-go.

In the days before mobile phones (it wasn’t that long ago; do you remember?) moving around hills for days with relatively little experience, in not the greatest weather and with, (as was to become the literal and metaphorical Achilles’ heel of the trip) a soon-to-be agonising pain in the back of my foot, it was important that our plans and route were verified by Mr Parkes so that each waypoint was reached safely. I remember how Martyn and I were asked so many questions about the intricacies of the route; the contours, turning points at the end of farm walls, forest track options, cliff edges to be wary of etc. that I’ve even mentioned it in the short diary I kept.

I also distinctly remember many snippets of information and advice, such as the location of the only source of fresh water for miles around on the third day, that steered us throughout the journey but were never imposed. We did not feel controlled in any way; we were being supported and led at the same time.

The days were long and increasingly arduous and, for me, painful – we never did finish the darn thing thanks to my sprained heel tendons – but all along Mr Parkes kept us in good spirits with a surprise cup of tea here and there, a satisfying pint at more than one pub on route and even half an hour of the World Athletics Championships in the warmth and comfort of the mobile home one evening. These little treats were enough to balance the challenges of navigation, bad weather and physical suffering Martyn and I were left to face ourselves as we made our way halfway around North Yorkshire together.

This kind of leadership – the kind that is there just when you need it and just isn’t when you don’t – has informed my thinking over the years. Pointing the way forward, ensuring you have prepared yourself well and supporting you along the way is the kind of leadership that is still needed in many a controlling work scenario today.

When you work this way, you come to trust your leader. That trust comes because they knew to trust you first.

I learned a lot about myself through this youthful undertaking and I also learned something of leadership – although I was perhaps less aware of it at the time – such that these memories have stuck with me and served as inspiration during my career.

I’ll finish as I did in my diary almost 26 years ago, “It was certainly an experience and I shall never forget it although I keep wondering how different it would have been had Terry not been along to meet us, encourage us and give us handy hints. We intend to take him out for a drink to thank him.”