Diagnosing attitude and behaviour can be done by looking at two things:

Attitude: How positive or negative the current attitude of the person is. So, for example do they want to get involved, want to drive forward, want to provide positive and constructive ideas and do they help and support the team. Or, do they dismiss ideas, resist change, upset the apple cart and maybe under-perform and not want to improve?

Energy: How motivated and driven are they? Do they speak up, do they want to fight their corner and stand up and be heard (whether positive or negative), do they try and influence others? Or, are they happy to sit on the fringes or on the fence and let everyone else make the decisions and they are happy to go along with things?

If we take these two areas and look at them in a simple model, we can see that using different mixtures of them gives us different kinds of attitude and certainly different behaviours. 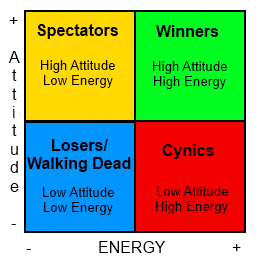 Cynics: Low Attitude and High Energy – These people have lots of energy and are not scared to use it. They use the energy mixed with low attitude to try where possible to pass there cynicism on to others.

Cynics tend to think that nothing new will work. They always look at the negative side of things, maybe due to failed attempts and the same idea in the past or an idea that they put forward sometime ago failed to receive the necessary support.

Spectators: Low Energy and High Attitude – These people have a high attitude, will probably do what is expected and will probably know what issues the team are facing and know what to do to fix them, but because they lack energy probably won’t shout up and share their ideas.

This low energy could be driven by a number of things including having the motivation sapped out of them by the leader or other team members, especially cynics. It could be that they have no personal drive or ambition or have accepted that they will never be able to climb the promotional ladder because of self belief or no opportunities being available in the business.

Losers/Walking Dead: Low Energy and Low Attitude – These people tend to always be on a low. They won’t shout about their feelings but it will be clear from their body language and probably their performance that they are not happy.

They will have the ability to sap the energy out of the team and the leader. They could have previously been in the cynic box or the spectators box and because this hasn’t been recognised, their energy and attitude has slowly slipped and this is where they have found themselves, maybe through no fault of their own.

The danger here is that they do start to find energy and move towards the cynics box, and start to spread negativity into the team.

Winners: High Attitude and High Energy – Somewhere we wish we and our team members are and stay. High performing people with great ideas, full of optimism and back ideas from the team and leader.

It’s great when people are here, but keeping them there is the difficulty. If you have have people in the other boxes around you the the energy can quickly be sapped and the attitude affected.

So, as a leader, what can you do with this.

It’s important to remember that when trying to influence behaviour, it’s not just about motivating people, you also need to influence the attitude.

Just motivating people can have negative consequences as shown I the model.

Influencing the attitude is about knowing your people, being realistic, communicating effectively and using techniques such as coaching to raise awareness of the attitude being demonstrated.

At Revolution Learning and Development we offer a number of different courses that look at both influencing attitude, motivation and changing behaviour. You can see the whole list of courses here.

Experiential Learning events are also a fantastic way of helping people to understand how their behaviour affects others. To learn more about experiential learning and courses that we offer, take a look at our sister site Square Earth Learning and Development.